Though not a werebear, Hal is a bear of a man, standing 6’5” tall and with a frame to shame some ogres the norseman makes for a formidable figure in a tavern brawl or a pitched battle. His mane of fiery hair and bushy beard make him easily recognisable – a fact he is all too aware of but which he cannot bring himself to do anything about. Recent events have turned Hal mercurial, with periods of joviality matched by long periods of being taciturn and introspective. The strain is made worse as being deceptive does not come easily to Halvard, yet he knows openness about his situation might put his companions and himself at risk.
He dearly misses the snows and seas of his home and takes some comfort in watching the stars by night and knowing that, from an astrological perspective – home is not that far away. It is short comfort however and increasing Hal has turned to drink and what he calls ‘rough play’ to distract himself.

Halvard is the third son to Jarl Dagrun Brandrbjorn, ruler of a powerful trading settlement named Hønefoss in the Skaros islands, far to the North East of Shadycreek. The Brandrbjorn’s have ruled Hønefoss for eight generations, much of their power is tied to the fact that the bloodline has a strong tendency to exhibit a genetic, but non-contagious form of lycanthropy. Whether defending territory or leading raids, a small unit of armoured white-bears is usually more than enough to tip the balance in the Brandrbjorns favour.

Halvard has not yet exhibited any shapeshifting tendencies, despite the clan’s druid, Oyvind, using all the usual rituals to encourage The Change. Both the shaman and Halvard’s mother, Saga, a seer of no small repute, are surprised that the The Change has skipped Halvard. For, though it is not unheard of for the gift to skip a generation, Halvard’s immense strength and size, combined with a shock of red hair and uncannily long incisors are all usually positive indicators of a scion who will join the ranks of the Leiptrbjorn – Hønefoss vanguard of werebears. Halvard, though somewhat disappointed, vowed not to let his ‘disability’ limit the glory he could bring to his house and focussed much of his early years on learning the ways of the sea and of trade, while his brothers mastered their bear-forms.

Several months ago, Erik, Halvard’s eldest bother was, ostensibly, killed by a stone troll while on a hunting expedition with the second of the Brandrbjorns siblings, Gunwald. None saw the troll but Gunwald, who himself was injured. Despite his elder brother’s protests Halvard ventured out to hunt down the troll and avenge Erik. Upon reaching the site of Erik’s death, Halvard and his retainers found Erik’s body, badly mauled and with his chest cavity torn open and his heart missing.

One of the party, Ari, Halvard’s uncle on his mothers side and an experienced ranger read the scene and sensed that something was wrong. The clearing where Erik was slain was a tumult of footprints; bear, wolf, some humanoid – possibly sea krai – which would explain the looting of the corpse, but nothing to indicate a troll. Also, the immediate area had none of the signs of being a troll’s territory. Fortunately, Ari was wise enough to not share this with the rest of the party – including Halvard. Instead he planned to hold a council with the Jarl and his wife and suggest launching a more formal investigation.

Half a day’s ride out of Hønefoss they were met by outriders, sharing the terrible news that the Jarl had fallen ill and that the house’s Oyvind was struggling terribly to overcome the disease, which he clearly felt had a supernatural component. Ordering Halvard to wait with two guards at a hunting lodge outside of the town, Ari rode with all haste to consult with Saga and the druid to share his fears of what might be afoot.

To Ari’s consternation, Saga was unsurprised at the ranger’s hypothesis that Gunwald, eager for power, had slain his brother and may have had a hand in the Jarl’s illness. She charged Ari with getting Halvard off the Skaros islands and out of harm’s way until the situation had resolved itself one way or the other. She promptly dispatched the ranger with a parcel of goods for her son: a sealed letter, a jade pendant in the shape of a bear’s skull, and her father’s bastard sword Trolbál.

Awaiting his uncle in the cabin, Halvard was disturbed to hear a strangled cry from one of his guards, who collapsed into the bushes he had been relieving himself into – an arrow protruding from the back of his neck. Halvard took up his spear to face his assailants shoulder to shoulder with the last remaining guard. His disbelief at the sight of Ari emerging from the treeline, only to knock and arrow and shoot the last guard clean through his right eye, could be matched only by the that which he felt at reading his mother’s letter: 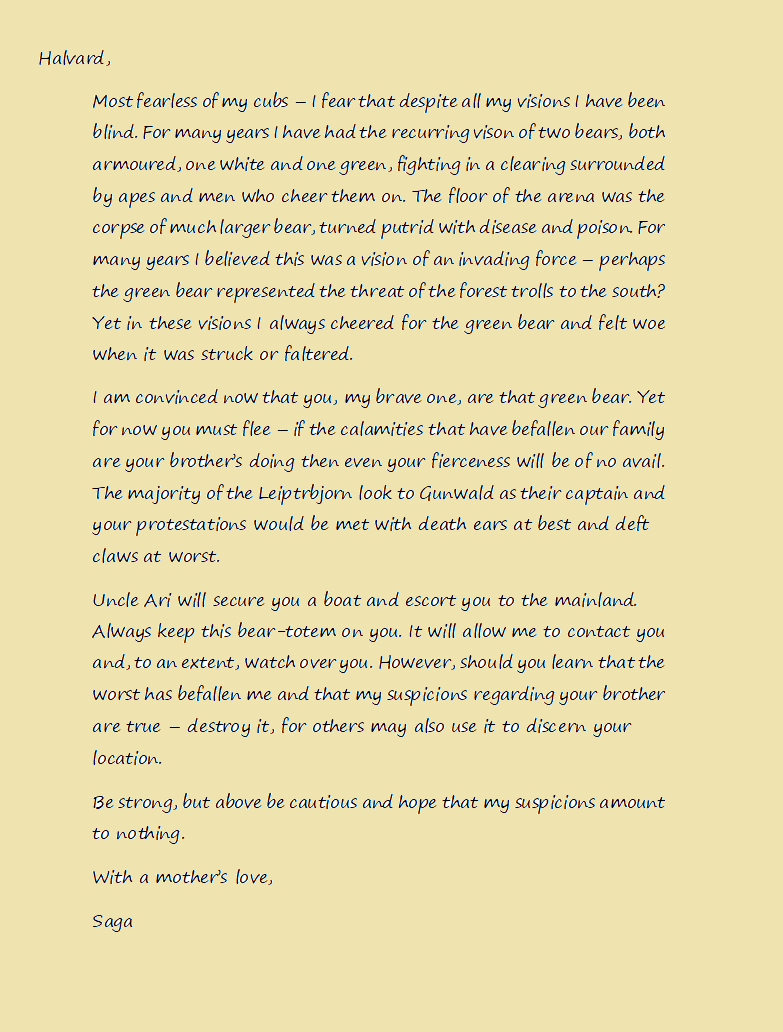 Though the sea journey was rough, and each league from home felt like a dagger thrust of shame, Halvard and Ari eventually made it to the mainland. Ari stayed in the port of Esthoe – hoping to secure allies if needed and yet able to hear intelligence from the Skaros islands from passing merchant vessels. At Ari’s insistence Halvard joined a trade caravan heading for Shadycreek as a guard, taking the name of Hal Redbeard to mask his movements and attempting hide his Norse accent as best he could.

It was as Hal crossed the border of Shadycreek Vale that the dreams came, sporadically, not every night, but frequent enough to make him wonder its significance, if any.

“Hal stands within a stone circle, the huge granite blocks upright and almost twice his size. Then he transforms, but not into the familiar form of the white bear, but an eagle, in whose form he soars up out of the circle, climbing into the chilled dusk sky. The circle he left stands on a mountain ledge, sheer cliffs drop on three sides and the higher mountain on the fourth, and as he sores higher he looks down and sees two further stone circles in the mountains, equally spaced to form a triangle. At their centre is a blinding light, it’s radiance so intense that he can see nothing within. He turns and dives, heading for the light when a sharp pain burns his shoulder, as an arrow slams home sending him spinning and falling into darkness, his last vision that of his brother standing with bow in hand….. "

Ascendant campaigns can view previous versions of their pages, see what has changed (and who did it), and even restore old versions. It's like having a rewind button for your campaign.

We've already been saving your edits, so if you upgrade now you will have instant access to your previous versions. Plus, you get a 15-day free trial, so there's nothing to lose.

I'm sorry, but we no longer support this web browser. Please upgrade your browser or install Chrome or Firefox to enjoy the full functionality of this site.